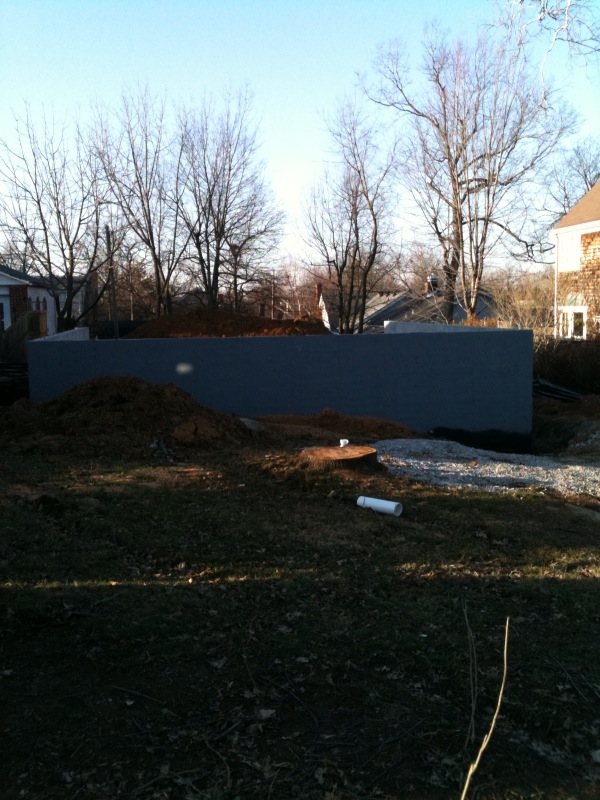 I use to live here.  Kinda.  back in the mid 1990’s my wife and I rented the little shack that sat on this lot and has since been relocated to the Fayette County Landfill.  I drive down this road frequently to get home after taking my son to school and one day the house was gone.  I would love to have been there to see it one last time before it came down.  It was originally a 4 room house that had a “Great” room addition on the front.  It had to be on the front because the house was built practically all the way back on the lot.  Many of the houses you see in Kenwick are like this.  I was told by long time Kenwick residents that there was some deed restriction loophole that allowed smaller houses to be built at the end of the lot.

I’ve actually lived in Kenwick on Lincoln Avenue twice.  My parents bought the house next door to this one when I was a sophomore at Henry Clay back in 1985.  My parent’s house had two little houses set way back on their lots on one side and another one on the other side.  My rental shack was on the side with the two small houses.  Since there was such a price difference between the houses, we had our fair share of neighbor issues…..this was in the 80’s before Kenwick became trendy.  Back then, it would have been the prime neighborhood to have shot an episode of “COPS”.   A neighbor on one side never fed his chained up pets and always blasted music.  After many friendly requests from my dad asking him to turn it down, he dared my dad to call the police.  My dad did.  When the police got there, the neighbor dared the police to arrest him.  They did.  That house was bought by somebody who remodeled it and it has since been featured in the Homeseller.  Go figure.

The 2nd house down on the other side was the same 4 room shack as my house before the addition.  It had asphalt shingle style siding that looked like brick, whereas my shack had been updated with asbestos siding in the 1950’s.  It always reminded me of the house where The Beverly Hillbillies lived before Jed became a millionaire.  It was torn down in the late 80’s and a wood shake sided house was built in it’s place.

My parent’s moved less than a year after we rented the shack next door to them.  I actually liked having my folks as neighbors except when my dad would fire up his BMW motorcycle at 6 every Saturday morning.  Where the shack sat so far back on the lot, their garage was about 10 feet from the bedroom window.  I’ve always credited my parents with having the foresight to see that Kenwick was on the verge of a transformation.  They were some of the first people to move in and fix up those old houses with something better than wall paper and paneling.  In reality, they wanted Chevy Chase but couldn’t afford it back then.  That’s how it goes for old neighborhoods.  Right now, there are people who’d love to be in the first block of Kenwick but can’t afford it, so they have settled for the second blocks.

I have a few funny memories of life in the house we rented:

1)  The mailbox was on a fence at the sidewalk.  I would park my car at the top of the driveway, get the mail, and then coast down in neutral to the house in my manual transmission car.  One day, I got back in the car, but instead of putting my foot on the brake, I put it on the clutch.  I didn’t figure this out until after I had rolled all the way down the driveway and crashed through the doors of the wooden shed at the end of the driveway.

2)  One night when my wife was away on a pharmacy rotation, a sheriff showed up after midnight to serve a warrant for the previous tenants.  After this house, I have always decided that any time I am thinking about moving to a new place, I would first randomly stop a sheriff and ask if he knew where the street was.  If he said he didn’t, then that would mean I wouldn’t mind living there.

3)  One day, I was doing some yard work and lost my wedding band.  That was kind of sad.  Some kid will be playing in the back yard 100 years from now and find it I bet.

Well, I am sad to see that old shack go.  I have a lot of good memories from my time on Lincoln Avenue.  I hope the people building this house enjoy their new place!