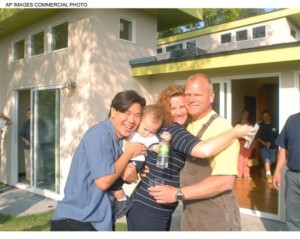 Any of you ever watch that show on HGTV called Holmes on Homes?  It is about this dude that goes in somebody’s house after the owners had a bad deal with a lousy contractor.  He fixes everything, gets it right, and in the end, he almost always gets a big hug from the people he helped.  While he is a great contractor, what folks like about him is that he cares about them and how what he does affects their lives after he is done.

I’ve noticed that I’m also getting a lot of hugs lately.  I had a closing where I represented both the buyer and the sellers.  I put together a deal that made both of them happy.   Got hugs from all of them.  Helped a couple buy their first house.  It was a foreclosure, so it was a little more complicated of a deal, plus I did a minor repair to the house so that it would pass the FHA inspection.  Got a hug at the closing.  Worked with a neat family that was pretty new to Lexington.  It was a really smooth deal until the radon level wouldn’t go down.  Got a hug at the closing.  Today, I had to say goodbye (for now) to a family that I’ve spent a lot of time with this week.  They are hopping back on a plane tonight after buying a really cool house while they were here.  We looked at a lot of houses, ate a few lunches together, and had a lot of laughs.  I got another hug.  I figure I must be doing a pretty good job because I am sure it isn’t as easy to hug a fat middle aged Realtor as it is a buff good looking contractor, even though I likely smell better.

I know I am making light of this, but it is pretty important to me.  I don’t know about you, but I’m only gonna hug somebody that I really like, trust, or has done something special for me.  Fire fighters, police, Mike Homes…..and now me, get hugs.   I think that is pretty neat.