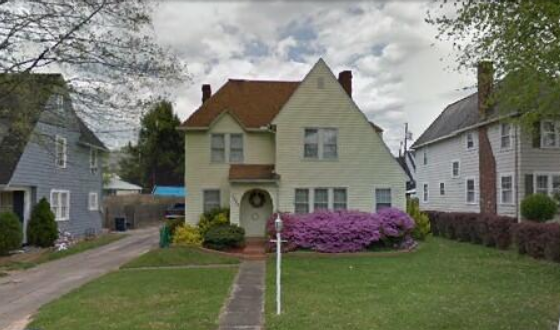 This was my grandparents house.  1669 Elliot Avenue in Ashland Ky.

I have lots of good memories of this place.  See that lonely window on the right?  That use to be a screened in porch.  My grandfather made it into a bedroom and the house’s 2nd full bath.  I helped him build it.  Well, as much as a 6 year old can help.  I remember trying to help him do something with the new toilet.  Using a hammer on porcelain turned out not being the right tool.  The house use to have white asbestos siding and diamond shaped shingles.  It had much more of the 40s character back then.

See that gray house on the left?  It use to be white too.  The neighbors added an in-ground pool in about 1975 or so.  It has since been filled in.  That driveway is shared.  It use to have two concrete strips with grass in the middle.  It has now been filled in too.  Not only was this the location of my first real estate lesson, it is also where I discovered my love for cars.  The neighbor with the shared driveway had a red Camaro with white stripes.  Probably a 1971-1973.  Car was super loud.  Then I guess the gas crisis hit and one day it was replaced with a yellowish MG Midget.  I loved that car.  Probably why I love my Miata and M Roadster so much.  The car smelled so good inside.  It had that great British car smell, which I have since realized is probably a combination of leather, dust and mold from a leaking top.   My grandfather had a series of old Datsun Z cars too, so I would hang out in the driveway and just look at the cars, counting down my days until I could drive.

This house is also where the “Incident” occurred.  I was trying to get a garden rake that was hanging on two nails off the garage wall.  I was a little kid and could only reach the very bottom of the rake handle.  I was successful at getting it off the nails, but not successful at preventing it from falling, tines down, on the hood of my grandfather’s car.  So, if anybody sees a brown 1975 Datsun 280z with 5 little dents right in the middle of the hood, please apologize to the owner for me.

The only bad memory of this place was the morning of May 29th 1977.  I remember my grandmother crying and not knowing why.  The lady across the street, who we called Tink, had died the night before in the Beverly Hills Supper Club fire.   I didn’t know that it was one of the deadliest fires in history.  I just knew my grandmother’s friend wasn’t ever coming home.  It was strange to be outside playing and see her red Olds Cutlass still in her driveway.  I thought that was a cool car and always remember her every time I see one.

I guess I better get to real estate now.

My grandparents decided to move to Florida.  I was so unhappy about this.  They used an agent with ERA.  Being the 70s, I had no idea WHY the Equal Rights Amendment people were selling my grandparent’s house.

A few years later interest rates went though the ceiling and Ashland Oil left town.  It was a double whammy for the local real estate market.  It took well over a decade for the house to be worth more than the buyers paid for it.

Supply and demand.  How interest rates and the local economy impact value.  What happens when more people are leaving town than moving in from another town…..Lessons I learned as a kid that benefit my clients today.  Other lessons I learned at this place?  Don’t throw a baseball through the neighbor’s window.  Don’t jump off the roof of a detached garage.  Every neighborhood has a grumpy old lady.   Your parents are the tooth fairy.

2 thoughts on “My first lesson about real estate”